It was a busy day at Fort Calgary with over 500 participants who made over 250 puppets using our templates and baskets of found craft items. Our colourful and fun puppet personalities created a visual metaphor for connecting diversity, generations and community.  Participants were also invited to give voice to their puppet on our video.

At the Puppet Open-Mic, participants enjoyed short puppet performances by Pete Balkwill from Old Trout Puppet Workshop, Kathryn Smith & Alison DeRegt from Pape and Taper, Iam Coultier from Quest Theatre, Leah and “Jack” of Fort Calgary, Michelle Warkentin with “Twinkle”, and our very own Wendy Passmore-Godfrey with “The Greedy Frog.”  Participants also got to interact with some giant puppets, the owl courtesy of Tam and bride courtesy of Ian and Gene of Mudfoot Theatre!

This event was a kick-off for our Biennial Puppet Power conference, taking place May 28-29 2016. Puppet Power 2016’s theme, “connecting generations”, examines the compelling strength of puppetry in advocating, educating and celebrating community connections across generations.

CALGARY PUPPETRY DAY IN THE NEWS! 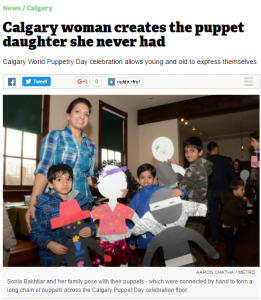 “My friend is making a daughter,” smiled Sonia Bakhtiar, who watched the kids as her friend worked. “She has three boys, so now she’s putting girl clothes on a puppet.”

Meanwhile their kids were expressing themselves through puppet ninjas, and a man made entirely of stickers.

The World Puppetry Day celebration, held by WP Puppet Theatre, encouraged people to create a puppet and add it to one of the chains of puppets set up through the space, all holding hands.
> read more 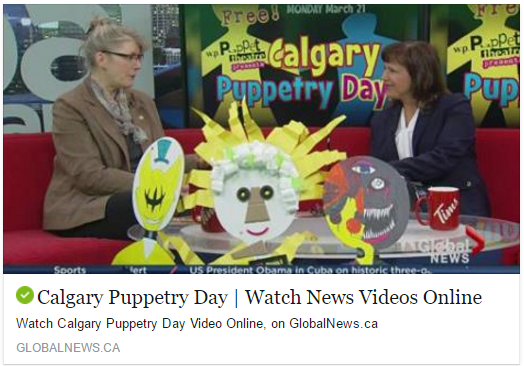 With a fury of felt, fun and furry-ness, World Puppetry Day is heading to Calgary for the first time with an attempt to create the world’s longest chain of puppets – no strings attached. Although some glue might be involved.> read more