by Jenna Pruner
Which came first?  Puppets or Halloween?

It’s likely puppets were invented around 4000 years ago in India when the concept of a “string holder” appeared in some Sanskrit plays. Additionally, Chinese puppet history reaches back 3000 years, and archaeologists have discovered evidence of Egyptian puppets from 2000 years ago, but they couldn’t have been used in what eventually became Halloween celebrations until 2000 years ago when Celtic people began marking this time of year with a Pagan festival called Samhain.

Puppets have been an art form used to explore and explain grand existential questions (about one’s identity for example) for a very long time. It makes sense they would shine at the time of year when we collectively contemplate the biggest of all existential questions…death.

A long time ago in places with a winter harsh enough to pause their growing season completely, humans confronted the impending season of death, with festivals.

At a time when the natural world would appear to be dying and they knew people were more likely to die, they looked the season, and death, directly in the face, and feasted.

The festival of Samhain was celebrated at the end of the harvest. Bonfires, feasts, and costumes marked the beginning of the dark half of the year and a time when the Celts believed that the veil between this world and the next was the thinnest. During this time of year, spirits could walk the earth and humans could communicate with spirits on the other side. The  Christian church came along and the Pope created “All Martyrs Day” at the unveiling of the Pantheon (125 AD).

Later “All Martyr’s Day” became “All Saint’s Day” and it was moved to November 1st.  All Saints day is the Hallowed part of Halloween and the night before, when spirits could be seen walking the earth through the thinned veil, was the eve or “een” part of Halloween.  The Celtic culture of Samhain was integrated into the newly emerging holiday and eventually became our modern-day Halloween traditions.

I know puppets aren’t actually alive, but really are there any objects that come closer to mimicking it? We can in effect “possess” puppets in the way corporeal spirits are seen to take control of living host bodies. In doing so, we lend puppets some of our own humanity, breath, and voice. It’s no wonder they provoke empathy from us in a way that can be warming to some, but unsettling to others at the same time. 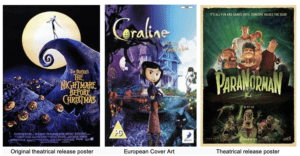 The proof is in the long list of the BEST Halloween movies of all time. To name a few …  From the friendly favourites; The Nightmare Before Christmas (1993), Coraline (2009), Paranorman (2012) 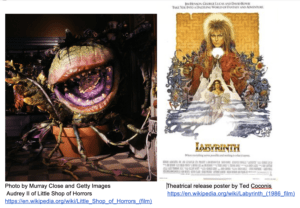 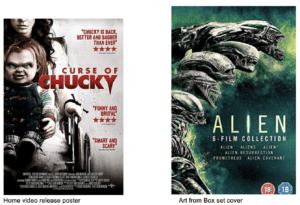 Puppets (as with some actors) have a huge range that may be explained by something called the Uncanny Valley effect. They can address terrifying concepts and questions like identity and death with a warm friendliness that we trust with our kids or in a way that might haunt our subconscious and show up in nightmares.

What is the Uncanny Valley effect?

The term “ Uncanny Valley” was first coined in 1970 by a Tokyo robotics professor named Masahiro Mori.

He noted a correlation between negative or positive reactions to robots based on how convincingly human they looked. Mori’s hypothesis stated that people react to the appearance of a robot with increasing empathy as it becomes more human-looking, until a point when it sharply drops off and becomes unsettling and even revulsive, before continuing towards near-human to human empathy again. 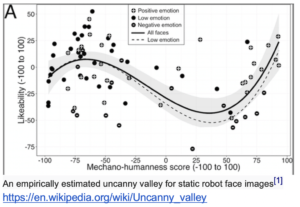 So in terms of puppets.  A sock puppet, with eyes made of buttons and a felt tongue, is non-threatening and will evoke empathy especially in young people discovering faces.  A marionette with its ability to pet a cat and take a walk or a fuzzy creature with two eyes and a mouth but furry hands may evoke even more empathy. However some may consider ventriloquist dummies to be crossing into the realm of unsettling and descending into the “uncanny valley”  with their moving eyes, and voice that seems to come from their own voice box.

Of course, every puppet is an individual, so I wouldn’t want to categorize too strictly, but it may explain why some puppets have the talent of leaving groups of people feeling unsettled.

It also explains why puppets are in their element at Halloween.

Halloween is a Puppet’s time to shine

Halloween has evolved into one of the most inclusive, universally loved, and simultaneously dreaded times of the year.

Kids love candy, parties, and fun characters.  Adults revel in the delicious fright and the irreverent fun. Taking a chance to thumb their noses, like the ancients did,  at the most inevitable part of being a human. Death.

We also ask anxiety-inducing questions about identity and what is behind “the mask”.  Humans are visual and symbolic thinkers.  We love to give form to anxieties so that we can defeat them, especially if the anxieties are about our own identity, place in the world, and humanity.

Puppets have thousands of years of experience doing exactly that.  Puppets continue to play such a part in our self-reflection that we often aren’t even aware of their presence in our lives. At Halloween, we see lots of cute puppet crafts for kids, and scary animatronic type puppetry in yards and “haunted” houses. In Halloween movies, we see puppets used to evoke empathy for the scary “other” or confront us about our own fears about our own otherness. They can put us on edge or put us at ease. Puppets that exist in the land of “uncanny valley” can awaken anxieties that only our primal brain recognizes in a way that is hard for other art forms to achieve. They are often the first form of entertainment that a child consumes and they exist in the adult world, nearly unnoticed.  This is why at the time of year when people confront the most primal questions for a day and an evening … puppets belong.

Here are some interesting videos about how puppetry is going digital. Does it increase empathy or cause and uncanny valley effect for you? Tell us in the comments.

2 thoughts on “Halloween’s for the Puppets”